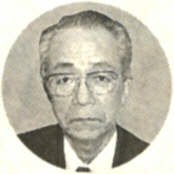 I was eleven years old, and there were twenty people living in my house in the Ohashi neighborhood, including my parents, grandmother, brothers, sisters and aunt. One day my father found a leaflet dropped by American forces and written with the Japanese words “Nagasaki will be a sea of fire.” So he built a small shelter on the side of Mt. Iwaya in a hurry, and my family started to commute there from a few days before the atomic bomb was dropped. Every morning, we went to the shelter, carrying onigiri (rice ball), first aid kit, defense hood, and other things. And we came back home in the evening.

On the morning of August 9, my mother and grandmother said, “August 8 has passed, and the leaflet was a bluff. We don’t need to go to the shelter any more.” However, my father said, “Because of the time difference between Japan and America, today might be the day. Go to the shelter.” I had no choice but to go there with my mother, grandmother and other family members. We carried some onigiri made by my eldest sister and potatoes for a snack. We arrived at the shelter and were having a rest when a brilliant light flashed suddenly, followed a few seconds later by a thunderous explosion. When I came to my senses, sheet metal shelter was gone, and the green fields of potato leaves had become as bare as a playground. My mother and younger brother were injured on the forehead and neck. When I looked down at the town, I saw something like a black cloud covering everything. My grandmother whispered, “It’s the end of the world.” I couldn’t understand what happened.

My father had been in a civil defense unit station since that morning. Around three p.m. he came back to our shelter, walking with a stick. His head, hands and legs were bounded up with rags. He said that he was saved from under a crushed structure, after he was exposed to the atomic bomb at the civil defense unit station. In the evening, my two cousins living near my house came. They told us that my eldest sister, who had seen us off with her handmade onigiri in the morning, had been killed and my brother’s wife too. In addition, they told me that my brothers were missing. I was deeply shocked. However I couldn’t cry because I was exposed to risk and feared for my life and had no time to cry. I think I was in a very abnormal condition.

I couldn’t sleep that night, or the next day and I descended the mountain and went to my home in Ohashi. On my way home, I saw corpses scattered over land, which was destroyed by the fire. I wandered desperately through the wasteland, choosing a path where no path existed. The view around my neighborhood had changed so much that one part of the dead tree was the only sign that I was standing in front of my house. After that, I heard about the death of my aunt and my brother who had been ringing the warning bell for the enemy aircrafts at national Yamazato Elementary School. My father, who had saved my life, suffered from fever and diarrhea and died on August 28.